Chris Gilbert has a wealth of driving experience both inside and outside the Metropolitan Police Service. He taught HRH Prince William and HRH Prince Harry to drive in preparation for their ‘L’ driving test. He has taught advanced driving to thousands of drivers.  Plus as a serving police sergeant at the world famous Metropolitan Police Motor Driving School Hendon he taught police officers high speed pursuit and 999 driving in powerful police vehicles. During his 22 years at Hendon he covered over a million instructional miles in perfect safety.

Chris now specializes in teaching members of the public police advanced driving techniques, based on Roadcraft, at normal speed.

Chris is also a DVSA Approved Driving Instructor with the highest grading. 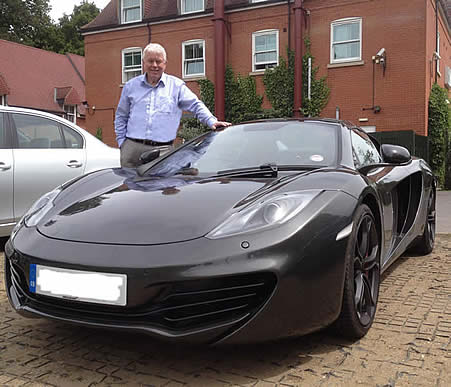 It is our view and experience that the very best people to teach advanced driving on the public highway are Class 1 police advanced drivers who have many years of police operational driving experience and more importantly, have also taught a range of police advanced driving techniques at a Police Driving School, such as the world famous Metropolitan Police Motor Driving School Hendon,
where Chris served for 22 years.
So, Chris is ideally placed to give advice and guidance in driving.

Chris was selected to give driver training to several members of the royal family.
Click below to view BBC News of Highgrove photocall.

TRAINING DRIVERS AT ALL LEVELS FOR ALL KINDS OF PURPOSE

Chris is one of a elite group of police officer instructors qualified to teach true high performance advanced driving on the public highway at speeds well above the National Speed Limit (as allowed by an Act of Parliament). For more than 22 years Chris trained drivers at these speeds in complete safety, without leaving the road, having a collision or causing one, and not once activating the ABS, thanks to Roadcraft methods and a high visual driving horizon. During this period of time Chris covered over a million instructional miles.

Chris was a member of the Home Office working party that produced the 1994 edition of ‘Roadcraft’, the UK Police Driver Training Manual which has a worldwide reputation for excellence. He acted as ‘critical friend’ to the Police Foundation production team for the 2008 edition of Roadcraft.  He was also a member of the Roadcraft Reflective Practioners Group who advised on the 2013 edition of Roadcraft, which has been widely acclaimed. Chris is one of the instructors featured in the Roadcraft DVD made at Hendon in 1996.

Chris was involved with other experts in research to find the best and safest method of cornering on the public highway. This involved hours of controlled testing on the race track, using speed measuring devices to compare different cornering techniques, and different vehicles to compare their handling. The method that gave the safest and most consistent cornering was ‘The Limit Point’ used in Roadcraft, the official police driver’s handbook.

Many people find ‘The Limit Point’ method of cornering difficult to understand even after reading about it in Roadcraft. Ultimate Driving Craft 2 Day & Night demonstrates it in easy to understand stages with the aid of clever graphics and slow motion.

To this day Chris is still actively involved in keeping Roadcraft up to date as a member of The Police Foundation Roadcraft Reflective Practitioners Group
attending regular meetings.

Chris has a long association with both the Institute of Advanced Motorists (IAM) and the Royal Society for Prevention of Accidents (RoSPA). To that end, for the past 30 years, he has visited many IAM and RoSPA Advanced Driving Groups around the country to give Advanced Driving/Roadcraft/Road Safety presentations to great acclaim. He passed the IAM Advanced Test in 1964 and 54 years later remains a member and supporter of the IAM. In 1966 he passed the pre-RoSPA League of Safe Drivers Advanced Test with a gold class 1 test. Chris was an Advanced Driving Examiner for RoSPA in 1980-2. For a number of years Chris was President of the North Staffs IAM Group alas, time constraints and travelling distances caused a reluctant withdrawal. He has also created several advanced driving DVDs helping thousands of drivers boost their driving skills.

If you have questions about advanced driving courses please visit my FAQs page to find out more.

Remember to switch your eyes on to main beam